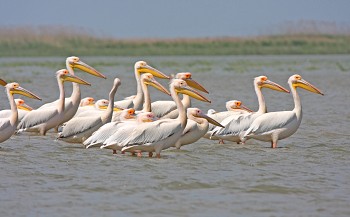 The infrastructure around the ornithological Sanctuary will be improved. It was formed naturally in a former fishing site, where the birds have developed the habit of taking shelter. By including such attractions, invasive and informative, we increase the premises of positioning the triangle as a true eco destination. Moreover, this destination is unique because there is no such arrangement elsewhere in the country.

Inside the bird sanctuary, an interpretation of the evolution of management of the Danube Delta in the last 100 years will be organized. With two hiding spots specially designed to observe birds from Cararoman, both tourists and photographers will enjoy unique images. They will notice the wonderful world of birds at very short distances without scaring the birds or disturbing their habits. Tourists will be able to stay in a camping site, within the piscicultural enclosure. The Bird Sanctuary is located on one of the most important migration routes in the Danube Delta, and attracts species such as terns, divers, ducks and herons, who find here good conditions for nesting. Pelicans, ducks and geese use the area as a place for refuge, rest and feeding.

HOW THE SANCTUARY WAS CREATED

Inside the piscicultural enclosure from Cararoman, due to low water levels in the spring when the lakes and channels have a high water level and many areas are flooded, the birds find refuge right here, a small and quiet water, where they have sufficient food. Thanks to the way in which the enclosure was built, the water begins to rise within the basin, but the growth rate is at a much lower level, so that by the mid-summer when the waters begin to decline already in the Danube Delta channels and lakes nearby, the water level inside the chamber is maintained constant, which attracts many species of birds. The water level begins to decrease within the basin of the bird sanctuary at the end of September.

Inside the large pool are mounted two nesting platforms which attract a total of 30 pairs of Black-headed gulls and terns with white cheek. They use the platform in order to lay their eggs. During the implementation of the project, two other platforms will be built, in order to increase the number of nesting birds. Nesting area offers favorable conditions for more than 50 species. Over 180 species of birds are found both during nesting and migrating and wintering period. Of these, a total of 55 species are protected. In winter, the area is protected from cold air currents, for which water freezes slower inside the fish enclosure, more birds finding refuge here during the cold period.

Those who wish, will be able to camp in the camping site built at Caraorman. The location will be included in the route advertised in the project.c onservation actions will be taken by the Romanian Ornithological Society in order to preserve the conditions that led to the formation of a bird sanctuary, so that visitors will be able to enjoy a protected area that offers favorable conditions for wild birds and unforgettable images for tourists.

Within the piscicultural enclosure, fishing and hunting are prohibited. During the last year there were no reports of presence of poachers in the bird sanctuary of Caraorman.

Since 2010, the sanctuary is under the observation of the Romanian Ornithological Society.