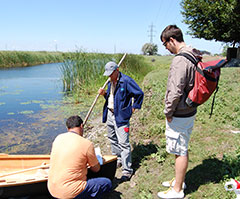 Crisan + Caraorman + Mila 23 - Ecotourism Project for Future Will created the premises for Promoting and Developing a branded destination in the Danube Delta ecouturism, by difining the common identity of the triangle area Formed by the towns Crisan - Mila 23 - Caraorman. The Project Will Be a model for sustainable development in the Delta. The Project is developed by the "Ivan Patzaichin - Mila 23" Asociation in partnership with the Romanian Ornighological Society (SOR), and enjoys the support of relevant strategic partners: the Danube Delta Biosphere Reserve, Crisan City Hall, Association of Ecotourism in Romania.

The project uses the following instruments:

• educational (ecotourism specialization for pensions operators in the area, teaching material on ecotourism values for teachers and students of the schools in the three communities, a center for promoting and interactive education about Delta at the Village Museum in Bu-charest),

The project also aims to define the marketing potential as a destination for ecotourism accreditation for the triangle. The process will be documented and become a model of good practice that can be trasferred easily. Project beneficiaries are residents of the three communities (a multi-ethnic popula-tion by definition), tourists and potential tourists in the Delta or in other protected areas, entrepre-neurs, local civil society, local and county authorities in the Delta.